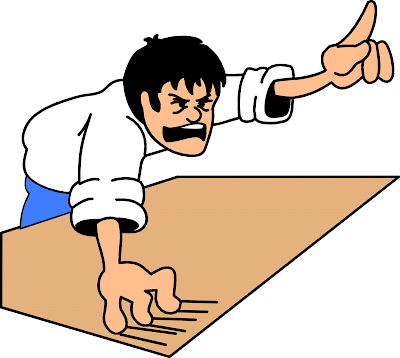 Obviously there are many views in the world and reason would show us they all can’t be right, so some one is right, someone is wrong, or everyone is wrong, but not everyone can be right. I am going to use the example from a Christian prospective, but it works for all in a way.

Lets say there is a person, he can be educated or not, it doesn’t matter for my point. He writes a paper criticizing another view point for being wrong and leading people away from the truth found in the Bible, that the other view isn’t scriptural and is dangerous to Christians. He lists evidence why that view is wrong, his view is right.

Now some people might think the topic he has taken to attack is a minor, that he is splitting hairs and unnecessarily dividing the church over a non-issue. But he believes it is an issue, or he wouldn’t have written on it.

So here is my question for the person who complains that this guy wrote this paper:

What would you have him do? He sees people teaching something that he doesn’t see in the Bible (perhaps him and thousands of other pastors and teachers), he sees how some people are responding to it, and how it is leading them away from Christ into unbiblical practices and teachings, what would you have him do? Keep his mouth shut? or Call them out on it? Challenge the belief and them?

Of course everything needs to be done in love, but love isn’t accepting wrong (or perceived wrong) teaching as true, that wouldn’t be loving. What if this teaching led to a wrong understanding of the Gospel and thus people who thought they were saved and really weren’t? Would it be loving for him to keep quiet or call them out?

If you believe that driving down a road is going to get people killed because at the end is a sharp drop off, wouldn’t you stand at the entrance of the road and warn people not to go down, wouldn’t you argue with them? How far would you go to stop them? When it comes to the Gospel, and a right understanding of Christ how far would you go to protect its purity and truth? How harsh or soft would your words be? What if the road just lead into a mud pit, and the person would get stuck for a bit, maybe damage their car a little, but no serious damage would arise. What would you do there? What if they were a stranger? What if they were family or a best friend? What kind of words would you use and how would they sound?

See my point? If you believe something is true, and that not believing it or understanding it hurts people, or that believing the opposite is dangerous or damning, what would you do about it? Perhaps you are wrong, but that doesn’t mean you don’t think you are right, you would be a bad person if you believed that the road lead to a drop off and certain death, and didn’t do anything to tell people about it, even if you were wrong and it didn’t. Because you believed it was so, and didn’t act on it, you sinned. If you believe that it is sinful to eat Apples and you eat an apple it is sin, only because you did it thinking it was a sin. Just like if you believed that someone would die eating an apple and you did nothing to stop people from eating the apple.

The same is with theology, all theology and philosophy has consequences, some are just getting stuck in mud, some are lethal, but none are neutral. If anything they affect how you live this life, but they may not affect eternity, but some do. As loving beings we do want others to be as happy and have the best life they can. Of course the most important thing we can do for others is introduce them to Christ, but what if they already know Christ? Are we then to not care anymore about them or how they live? “well they are saved that’s all I need to do”.

Of course not, we want them to live healthy, happy lives. So if we see someone in perceived error, we should and ought to want to help them. Yes, we need to be humble and loving (which is all I think you can criticize these people for, not for attacking another view). Just in my example, it may be that the view he is attacking is only a stuck in the mud view, and will not ultimately hurt the person, but it will have some negative affects on the person. I believe it is loving to point this out and do our best to help others.

But we should be aware that we can be wrong, and be willing to always check our views and change them if necessary to fit the evidence. However, my argument is that it lies more on the people being attacked for causing the division than the one attacking. The one attacking is responding out of a sense of responsibility, how can we fault them for that? Where the one being attacked can choose to respond calmly in love and respectfully understanding that the other person does truly care about them, or they can respond in hostility and break the relationship.

Yes, the person attacking could make it hard for the one being attacked by being hostile and mean, but that doesn’t give the person being attacked to respond in kind. The one attacking in the poor way, is responsible for his actions and will reap the consequences of it, and should be reproved for how he went about attacking, not for the attacking itself.

It’s also worth noting that we should welcome challenges to our beliefs, if our beliefs are correct they can stand against the onslaught, if they are wrong, shouldn’t we want them changed then? Paul said be ready to give a response to those who ask about (and I would argue challenge) your beliefs. Doesn’t this mean we are to know what we believe and why? Thus we should welcome challenges it only helps us learn the truth deeper or get away from untruth, in either way it’s a blessing and benefit.

So next time someone challenges your belief thank them and be better off for it!

At least that’s the way I see it ☺

3 thoughts on “Are Hair Splitters Bad?”