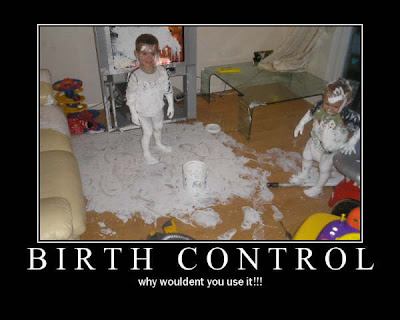 So I have heard of people using a birth control method called the faith method. Basically it is: “If God wants us to have children, then He will give us children”. My thoughts on this are two fold. First, if you are ready and willing to have children, well this is a great method to facilitate that. However, if you are using the method and desire to not have children, don’t be disappointed or surprised when you do.

Back to the previous idea, and please forgive where the analogy breaks down. But I see the faith method a lot like jumping out of a plane at 20,000 ft without a parachute. If you are jumping out of the plane with out a parachute trusting God that you will die when you hit the ground, that’s fine, which is just like having sex with out protection and trusting God that you will have children sooner than later (of course this breaks down in many ways, because some people are unable to have children for other reasons, while no one is able to naturally survive a 20,000 ft fall). But if you are jumping out of the airplane without a chute trusting in God that you won’t die until His timing, you might be disappointed and surprised to find out that when you hit the ground it was His timing. Just like having sex, you might be surprised to find out that when you did it, it was His timing for you to have a child.

To me, to think this way and hope to not have children is kinda like testing God, which i don’t think He wants us to do. However, I do think that God uses such things (foolish as they may be) to get His plans accomplished, namely the person dying by jumping or someone having kids through sex.

One last thought about this to think about. Just because its God’s will, doesn’t mean that the thing in of itself is good, or wise, or that you won’t be held accountable for misuse, abuse, ect. God allows a lot dumb, sinful, unwise, things to happen, obviously for His purposes and glory (and our good if we Love and trust Him). So by God letting you do something doesn’t excuse you from the fact you might have been unwise in it, or that the thing that happened was the best thing, or God’s ideal for you. Sometimes God lets us make dumb choices, and then lets us reap the consequences (I’m just thankful that i don’t have to reap eternal consequences for my sins, thank you Jesus!).

So for you people that may have used the Faith method and have gotten pregnant: Please don’t encourage others to follow such silliness unless they want kids. Second its ok that you did, although it might have been unwise, God will not give you trials in which you cannot handle through faith in Him. You might suffer more than you needed too, but it will all work out for God’s glory and your good (if you love and trust God), ask Him for strength and wisdom in this new adventure you are in. It’s not the end of the world, God is still King, and we all are sinners who do stupid things all the time, so you are not alone.

For those people who do not yet want kids:

1. If you are not married and you do not want kids right away, or you are not ready to have kids right away, do not get married, do not have sex. No method is 100% foolproof, there have been people who have been “fixed” and have had kids. I know of a man who was fixed, had a kid, got fixed again, and had another. There was also this guy who was like 100 and his wife over 90 and they had kids… So nothing is a guarantee except abstinence (except in the Virgin Mary).

2. If you are married and you don’t want kids yet…stop having sex. Since this isn’t biblical, you probably should start getting ready for kids. You probably should try to use birth control (i would recommend not using certain types, as they actually kill the baby), and pray a lot that God will prepare you for kids, and you should probably try to get your house in order to have kids. Also a doctor could tell you if you are able to have kids and you might not be, so then you shouldn’t worry as much, but you should still have some worry considering anything is possible with God. One of the main purposes of marriage is to have kids, and if you are not ready for that purpose, you shouldn’t be married, or else you should get ready fast. Since divorce isn’t an option for married people, you should get ready.

3. My last thought on the issue is, that you should try your best to plan your marriage, and kid bearing using wisdom. Although you shouldn’t get married unless you are ready for kids (at least in the most basic way), getting married doesn’t mean you should have kids right away. You should use judgement and you should try to become more prepared until you do. You should also enjoy the time God gives you without children.

4. Children are from God, and He will give them to you if He desires and when. You should, however, be ready if you are having sex to have kids at that moment.

Well that’s my thoughts on it, anyone have anything to say / add?